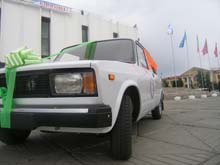 Twenty-four-year-old throat singer Bady-Dorzhu Ondar has won the Throat Singing Contest that took place in connection with the Fifth International Symposium "Xöömei: cultural phenomenon of the people of Central Asia." The international jury's decision was announced today at the final concert. The jury had listened to more than 100 xöömei artists and ensembles from Russia, Kazakhstan, Mongolia, Finland, Norway, Japan, and the United States.

The Grand Prize was a VAZ-2105, which had been parked next to the Musical Drama Theater during the three days of the festival. In the ensembles category, the world-renowned group Chirgilchin came in first. They received a cash prize of $3000.

Bady-Dorzhu Ondar belongs to a young generation of xöömei artists. He began his professional career very early. At the age of eight, the young throat singer began to tour with his teacher, the well-known xöömeizhi (throat singer) Kongar-ool Ondar. Teacher and student appeared on one of the most popular American television talk shows, the David Letterman Show.

In July 2005, Bady-Dorzhu Ondar won Best Vocalist at the Üstüü-Hüree Festival, and in September 2005, he was awarded a special diploma for artistic mastery at the N. N. Kalinin Fourth All-Russia Festival-Competition of Folk Orchestras and Ensembles of Folk Instruments.

In May 2006, he was recognized as Best in Competition among xöömei performers on the 85th birthday of the famous throat singer Maxim Dakpai. For his Grand Prize he was given a horse.

In December 2007, by decree of Sholban Kara-ool, head of the Republic of Tuva, he was given the title People's Xöömeizhi of Tuva. The award was timed to coincide with the 15-year anniversary of his professional career.