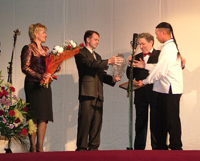 A soloist of Alash ensemble, the young throat singer Bady-Dorzhu Ondar, has won Best in Competition among xöömei artists and has received a horse as Grand Prize. The competition among xöömeizhi took place in the village Iyme (Sut-Khol area of Tuva) and was dedicated to the memory of the renowned master throat singer Maxim Dakpai on the 85th anniversary of his birth. The contest was organized by xöömeizhi native to Iyme, including the well known Kongar-ool Ondar, who headed the jury.

Maxim Dakpai (Dakpai Mongush) was the winner of the 6th International Festival of Youth and Students in Moscow in 1957. In 2000, his name was entered posthumously into the Republic's book of "greatest people of the twentieth century."

First Prize winner in this year's competition was Mongun-ool Ondar, who received a cash prize of 1000 rubles. Second place winner was Eric Saryglar, who was given a mobile phone. In third place was Igor Koshkendey, whose prize was a set of china. The well known group Chirgilchin won an Honorable Mention for Professionalism.

Bady-Dorzhu Ondar was born in the village Iyme. He began studying throat singing under the tutelage of Kongar-ool Ondar at an early age. When he was 9 years old, Bady-Dorzhu Ondar and his teacher visited the United States and were guests of the well-known comedian and talk-show host Chevy Chase (see video clip). They appeared before a television audience of several million.

In July 2005, Bady-Dorzhu Ondar won the Best Vocals category at the Ustuu-Huree Festival, and in September 2005 he was honored with a special citation at the 4th All-Russia Festival of Folk Orchestras, dedicated to Kalinin and held at the Saratov Folk Arts Center.