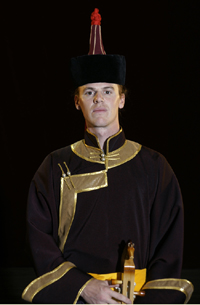 Sean Quirk is the manager, producer and interpreter for Alash. Born in Ohio and raised in Milwaukee, Wisconsin (USA), Sean's passion for Tuvan music developed after hearing a Huun-Huur-Tu CD while he was a student at Macalester College in St. Paul, Minnesota. Sean set about learning xöömei and won a Fulbright fellowship to continue his studies in Tuva in 2003. Since his arrival in Tuva, the members of Alash have been his friends and instructors. He sometimes joins the group in encores at their performances. Sean and the other members of Alash are also members of the Tuvan National Orchestra.

Sean has mastered the Tuvan language and has become a passionate and respected spokesman for Tuvan music and culture both in Tuva and abroad. For this work, the head of the government of Tuva presented Sean with a medal as a "Distinguished Artist of Tuva" at the Naadam Festival on August 1, 2008. In 2013, Sean curated the Tuvan delegation to the Smithsonian Folklife Festival, One World, Many Voices: Endangered Languages and Cultural Heritage, where he emceed the Tuvan performances.