During its brief period of independence from 1921 to 1944, Tannu-Tuva produced a variety of exotic postal stamps. Brightly colored, depicting local themes, and often of an unusual shape, they were a favorite of collectors. Memories of the triangular stamps he collected as a child sparked Nobel Laureate physicist Richard Feynman's quest to travel to Tuva. This, in turn, led to his discovery of Tuvan throat singing, and to the introduction of this ancient art to Western audiences. 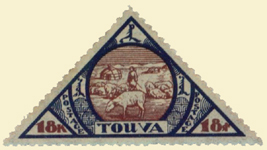 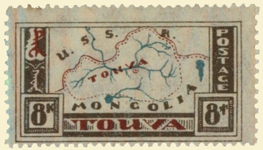 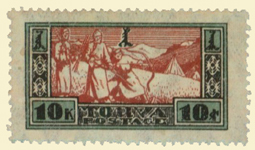 1932.  Stamps of third (ethnographic) issue with a typographed overprint of the new value and the name of the country in the new Latinized alphabet.

1936.  Twelfth issue. Jubilee of the 15th Anniversary of the porclamation of the Tuvinian People's Republic.

Coat of Arms of the
Tuvinian People's Republic

Episode in the struggle against
counter-revolutionaries

Read more about Tuvan stamps:  Tuva Hopes Philately Will Get It Everywhere by Andrew Higgins.

See more at Friends of Tuva:  The Stamps of Tuva.