ensemble is a trio of master throat singers (xöömeizhi) from Tuva, a tiny republic in the heart of Central Asia. The ancient art of throat singing (xöömei) developed among the nomadic herdsmen of this region. Alash remains grounded in this tradition while expanding its musical vocabulary with new ideas from the West. 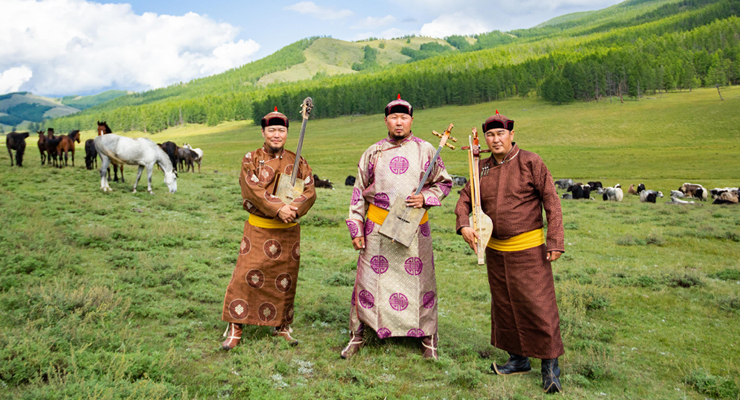 Name: The ensemble is named for the Alash River, which runs through the northwestern region of Tuva. The Alash River has also inspired a couple of Tuvan songs which carry its name.

Background: All members of Alash were trained in traditional Tuvan music since childhood, first learning from their families, and later becoming students of master throat singers. In 1999, as students at Kyzyl Arts College, they formed a group called Changy-Xaya. They practiced in the damp college basement on Kochetovo Street, and soon became the resident traditional ensemble on campus. At the same time they learned about western music, practiced on hybrid Tuvan-European instruments, and listened to new trends coming out of America. 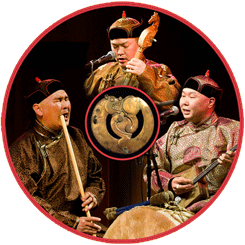 Under the guidance of Kongar-ool Ondar (best known to western audiences for his role in the film Genghis Blues), Alash began to forge a new musical identity. They introduced the guitar and sometimes even the Russian bayan (accordion) into their arrangements, alongside their traditional Tuvan instruments. They experimented with new harmonies and song structures. The effect is an intriguing mixture of old and new.

Influences: The musicians are inspired by the music of their grandparents, great-grandparents, and the great musicians of Tuva and Central Asia. At the same time they are influenced by such western artists as Sun Ra and Jimi Hendrix. Yet the Alash musicians never sacrifice the integrity of their heritage in an effort to make their music more hip for an American audience. Rather they look for contemporary ideas that mesh well with the sound and feel of traditional Tuvan music.

Alash in America & Beyond: Alash's inaugural U.S. tour was sponsored in 2006 by the Open World Leadership program of the Library of Congress and the National Endowment for the Arts. The Washington Post described their music as “utterly stunning,” quipping that after the performance “audience members picked their jaws up off the floor.” Since then, Alash has returned to the U.S. every year, playing to enthusiastic audiences and presenting workshops to students of all ages (brochure for Alash's K-12 workshops). Alash is now in high demand internationally, performing in concert halls and major festivals in Europe and Asia as well as North America.

For articles about Alash and Kongar-ool Ondar, see Media page