The IGIL is a two-stringed instrument whose teardrop-shaped body is held between the legs and bowed like a cello. The igil is sometimes called a horse-head fiddle because the peghead of the instrument is often decorated with the carved head of a horse. The sound box may be made entirely of wood, or the face of the instrument may be goat skin stretched across the frame. The strings are made of horsehair. Unfretted and tuned a fifth apart, they are fingered very lightly, not pressed to the fingerboard. The tones of the igil are varied and rich, not unlike the sound of a cello. Bady-Dorzhu Ondar is shown playing an igil made by Oktober Saya. 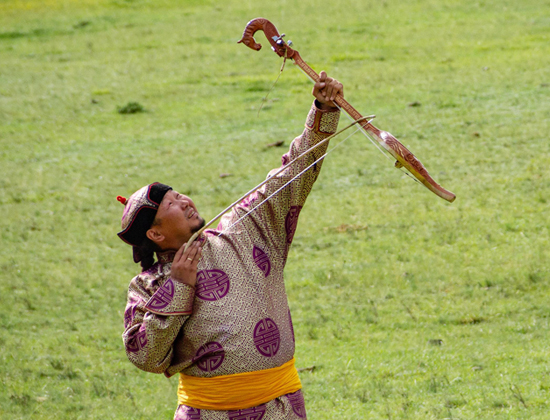 2009 was the Year of the Igil in Tuva. This folk instrument, important in Central Asian nomadic cultures, has long been identified with the Republic of Tuva. In the Year of the Igil, the Ministry of Culture and the Center of Traditional Tuvan Culture sponsored a series of activities to revive the old masters' techniques for making folk instruments. There were also roundtable discussions, seminars, and competitions.