The DOSHPULUUR is a three-stringed instrument, often compared to the banjo because it is plucked or strummed, although the doshpuluur's strings are unfretted. The sound box is made either entirely from wood or with goat skin stretched across a wooden frame. The first two strings are tuned a fifth apart and the third string forms the octave. In a four-stringed variety of doshpuluur, an extra string doubles the fifth an octave below. Ayan-ool Sam is shown playing a three-stringed doshpuluur made by Sholban Salchak.

The double-necked doshpuluur shown on the far right is an innovation made for Alash by Marat Damdyn. Each set of strings is tuned to a different key so that the player can quickly switch back and forth. This doshpuluur was designed specifically for the song "Oitulaash Xeveri." 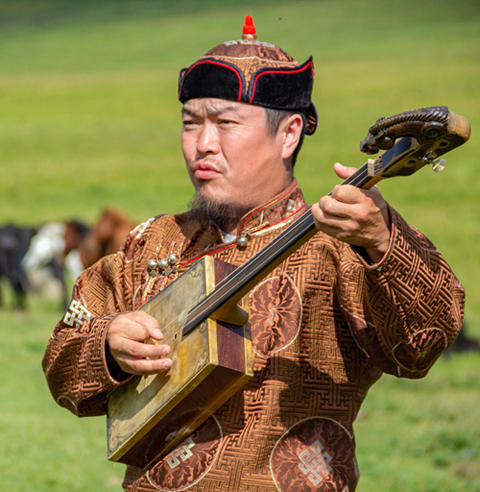 Watch Bady-Dorzhu Ondar play the double-doshpuluur, an instrument made especially for Alash.
Alash is performing outside the Rubin Museum Art as part of the Make Music New York festival, 2007.
(filmed by Kirt Markle)