The BYZAANCHY is a bowed instrument with four strings. The first and third strings are tuned to the same note, and the second and fourth strings are tuned a fifth higher. The sound box is covered with goat skin in front and is open in back. Mai-ool Sedip is shown above playing a byzaanchy made by Kang-Xuler Saya. 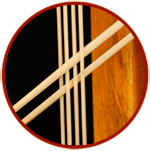 The word "byzaanchy" comes from the Tuvan word for calf. It is said that playing the byzaanchy is like milking the sound out of the instrument, as if the four strings were the four udders of a cow. The bow is threaded between the strings so that it is drawn across both the upper and lower surfaces of the horsehair, and it is permanently locked to the instrument. The strings are lightly fingered from underneath rather than being pressed against the neck. These features can be observed in the video below. The byzaanchy resembles the Chinese huqin family of instruments.