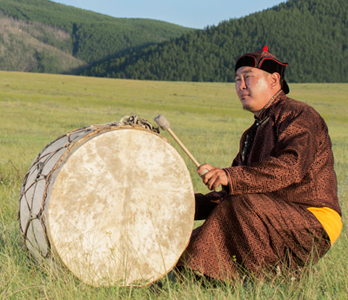 The KENGIRGE is a large frame drum, introduced into Tuva by the Tibetan Buddhists. The sides of the kengirge are made of goat skin which is tapped with the fingers or struck with a mallet. The drum is tuned by tightening or slackening the straps around the frame. Ayan Shirizhik is shown with a kengirge made by himself and Sholban Salchak.

The DUYUGLAR is a pair of horse hooves that are clapped together rhythmically to create the clop-clop sound of a trotting horse.

The SHYNGYRASH is a set of small bells like those used as ornaments on the heads or necks of horses. The bells are threaded together and sit atop the kengirge or inside the duyuglar, so that when the musician strikes the top of the drum or claps the hooves, the bells jingle in rhythm and evoke the sound of trotting horses. The shyngyrash shown above was made by Ayan Shirizhik.

The XAPCHYK is a rattle made from the dried scrotum of a bull. Inside are sheep knuckle bones which rattle when the xapchyk is shaken.

Above and below: Watch Ayan Shirizhik play the kengirge and shyngyrash with Alash
outside the Rubin Museum of Art, as part of the Make Music New York festival, 21 June 2007.