Alash enjoys collaborating with musicians of many genres.  Here are a few examples:

Alash was part of the "global jam band" assembled by composer Austin Wintory to record the soundtrack for the video game The Pathless, released in November 2020.
In the words of the composer, "Collaborating with the fabulous Tuvan trio of the Alash Ensemble yielded the backbone over which all the rest of the score is mounted."

“The Tuvan Horseman,” composed for Alash by Muriel Anderson, recorded in Nashville. In the video, Alash also shows Muriel how to make Tuvan lamb dumplings, which she features in her CD/cookbook Acoustic Chef.

Alash with Béla Fleck and the Flecktones

Quick Center for the Arts  •  Fairfield, Connecticut  (12 Dec 2008)
“Dyngyldai & What Child Is This?”
(more videos with the Flecktones)

**Marshall Allen on alto sax, clarinet, and flute; Elliott Levin on tenor and soprano sax, and flute; Dave Hotep on guitar; Dave Davis on trombone; Fred Adams on trumpet; Howard Cooper on bass; and Ed Watkins on drums. All of the "Guests" except Elliott and Ed were also members of the Sun Ra Archestra. 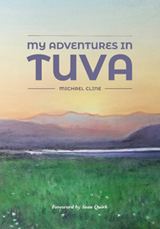 Our friend Michael Cline first discovered the magic of Tuva in 1999 after a harrowing couple of years fighting personal demons. His fascination with a place no one has ever heard of probably saved his life, allowing him to focus on something much more positive. After befriending Alash and other touring Tuvan bands, he eventually took the leap and traveled to Tuva three times. His book My Adventures in Tuva tells his story and makes a great field guide for visitors to Tuva.