The MURGU is an overtone flute with a treble range. It is an end-blown tube with no holes, usually made from the stalk of an angelica plant. Melodies are produced by adjusting the airflow and covering or uncovering the bottom end with a finger. Since the traditional murgu is fragile and impermanent, Sayan Chambal crafted a special one for Alash, to withstand the rigors of touring. The murgu shown below left is made from a ski pole. 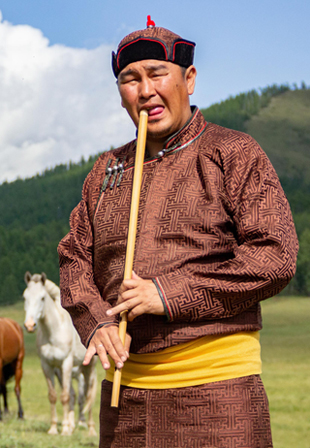 The SHOOR is a long end-blown flute made from a hollowed-out willow or larch branch, with holes for varying the pitch. The player places the shoor in the corner of his mouth, with the end partly in front of the teeth, partly behind them, and uses his tongue to complete the embouchure.  →

Three legends about the shoor

The LIMBI or limpi (not shown) is a side-blown, open-ended flute with an alto range. It is made of wood or bamboo, with holes for controlling the pitch. The number of holes varies.

The AMYRGA is a hunting horn made to imitate the mating call of the male Siberian red deer. It is not used melodically but only to mimic the animal's sound. The player inhales rather than exhales to produce a tone. The long conical tube is generally carved from Siberian pine in two halves which are fastened together with birch bark, but the same sound can be produced from a slightly tapered cone of any rigid material. The amyrga shown at left is made of coated paper.